Ingredients :
4 egg yolks.
1/2 cup granulated sugar.
3 tbsp water.
2 stickcv butter at room temperature.
vanila extract.
pinch of salt.
Directions :
1. Combine sugar and water in medium saucepan. Heat over low heat, stirring with a metal
spoon until sugar has dissolved and the syrup is claer. increase heat to medium-high and
allow syrup to come to a boil.
2. Meanwhile, place yolks in the bowl of a stand-mixer fitted with the whisk (or, if using a handheld
mixer, in a medium mixing bowl) and beat until thick and foamy.
3. Cook syrup until is registers 235 degrees F, then immediately remove from heat, with the
mixer running, slowly drizzle hot syrup the bowl with the yolk; don't pour the syrup onto
the the whisk, or the syrup may splatter against the sides of the bowl instead, aim for a spot
close to the whisk once all the syrup has been added, keep mixing until the bottom of
bowl feels cool to the touch and the yolk mixture has cooled to room temperature.
4. Add butter one  cube at a time, beating well after each addition. Beat in vanila and salt. Continue
mixing until the buttercream looks smooth and creamy, about 5 minutes.( iff the buttercream
separates, keep mixing it will come to together eventualy.
5.Use buttercream immediately or rerefigerate in artight container or zipper-lock bag for up to 2 week
or in the freezer four to 2 months. To use buttercream that has either been refrigerated or
frozen, first allow to come to room teperature then beat until smooth and spreadable again.
Cake or cupcakes decorated with buttercream generally keep up to 3 days, stored in airtight
container in the fridge.


NOTE :* Flavor this buttercream however you want.
**    Use fruit puree to flavor for a tart and refreshing taste.
* Try adding melted chocolate for a chocolate frosting.
* Try adding food coloring for nice pop of color.

Preparation :
1.Preheated oven to 350 degrees F. Beat butter at medium speed with an electric mixer until
creamy, gradually add sugar, beating until light and fluffy. Add eggs, 1 at a time, beating
just until blended after each additon.
2. Combine flour, cocoa powder, baking soda, add to butter mixture alternately with flour
mixture. Beat at low speed just until blended after each addition. Stir in vanill, stir in red food
coloring, spoon cake batter into 3 greased and floured 8 inch round cake pans.
3. Bake 350 degrees F for 18 to 20 minutes or until a wooden pick inserted in center comes
out clean. Cooling pans on wire rack 10 minutes. Remove from pans to wire racks , and
let cool 1 hour or until completely cool.
4. Spread 5 cup cream cheese frosting between layers and top sides of cake.
Posted by Betsi at 3:57 PM No comments: 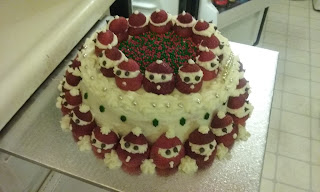